Brightly-colored homes set in neat terraces punctuate an oft-bleached sky. I wonder whether an ancient bye-law dictates color-wheel choices; or whether locals simply have good design taste. The look is well coordinated: a fashion show of urban planning. 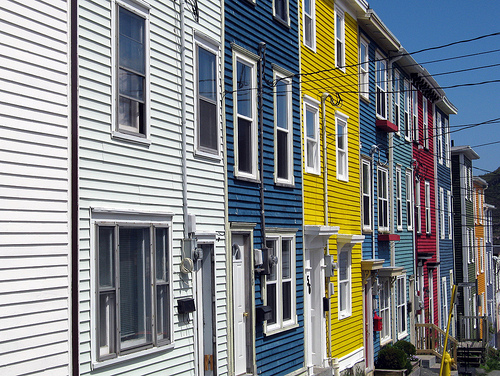 A coffee-shop culture fuels a vibrant population. We’re in North America’s far east; just an Atlantic-scale hop away from Ireland. Yet St. John’s offers up a cosmopolitan city vibe. It feels like a combination of Portland, Oregon and Burlington, Vermont, dishing up a variety of surprises… delicious local cuisine, poetry slams, contemporary art galleries and an intrepid outdoors-y crowd.

The fishing community of Brigus in Conception Bay

National Geographic Traveler magazine recently hailed Newfoundland’s Avalon Peninsula to be the number one coastal destination in the world in recognition of its authenticity and stewardship (Wales’ Pembrokeshire coast was rated #2). The blend of controlled tourism growth alongside remnants of a once-thriving fishing and canning industry now balances ecological and conservation efforts. But, in part, this is self-governed by the unique location, climate and infrastructure. Brands like Marriott and Choice have set out a cluster of hotels in downtown St. John’s, but the province is satisfyingly void of sprawling resorts or double-decker tour buses. Here is a region just waiting to be discovered, and one that is quite happy to wait for the tourist to be ready for that voyage of discovery!

Back in St. John’s, be sure to stop by The Rooms, the city’s latest cultural addition, bringing together an art collection, local history and community art space. Just across the road, chat it up with locals at The Big R where you’ll also find hearty portions of fresh fish and chips washed down with local Quidi Vidi beer.

To be at one with the brewing process, head out to Quidi Vidi village, a picture-postcard harbor-side neighborhood within St. John’s city limits. Ramshackle boathouses and historic buildings intersperse more modern homes along the waterfront. But it is the brew house building and restaurant which dominate to provide the hub of activity today where once fishing boats returning with the day’s catch would have taken center-stage.

Even with a spiraling sea mist and clouds which hang over the land, Newfoundland doesn’t fail to impress. The near-constant gray drizzle make those rare blue-sky moments all the more special.

And my visit was special from the moment of arrival at St. John’s International Airport, when the flight attendant announces that local time is an hour-and-a-half hour ahead… “welcome to St. John’s!”

You can do this

Flights to St. John’s are expensive. I took advantage of one of West Jet’s 30% off sales proving that it pays to sign-up for airline newsletters!

Preferring not to drive, I booked a couple of day excursions with RJ Tours, with Dave taking care of the itinerary and patiently waiting while I hopped out at every opportunity for photos. I spent another two days exploring downtown St. John’s and heading out to Cape Spear.

I stayed at the Quality Hotel Harbourview which, while distinctly average, was a reasonable location for trekking around the city.

Paul Chibeba now lives in London and works for the Royal Botanic Gardens, Kew after having spent nine years living and working in New York City.
View all posts by Paul Chibeba →
This entry was posted in Uncategorized. Bookmark the permalink.