North America by train; a passion, not friends-with-benefits

“Railway termini are our gates to the glorious and the unknown. Through them we pass out into adventure and sunshine, to them, alas! we return.” E M Forster

We take off. Then land. I’m magically in a new corner within hours. Maybe I crossed mountains. Perhaps a river. I’m pretty sure we passed farms, cities and villages. Flying is a friends-with-benefits approach to travel. You get there just fine, but it’s not as meaningful as travel should be.

So, when my schedule permits, I love to travel by train. Amtrak and VIA Rail are both awesome. Interesting fellow-travelers, plenty of space to stretch out and, of course, those incredible views. A chance to see the “real” America between glimmering cities. This is “slow travel” at its very best.

Many train stations epitomise a bygone era of travel… heightening the excitement and anticipation of fellow travelers waiting in grand concourses.

I’ve almost crossed America by train. Sadly, though, I have to wait until 2020 before a route might exist to complete my journey: Denver to Albuquerque. A neat interactive map heralds America’s hopes and dreams for an impressive high-speed network. This is exciting. This could be the future.

I mapped my rail and bus travel: 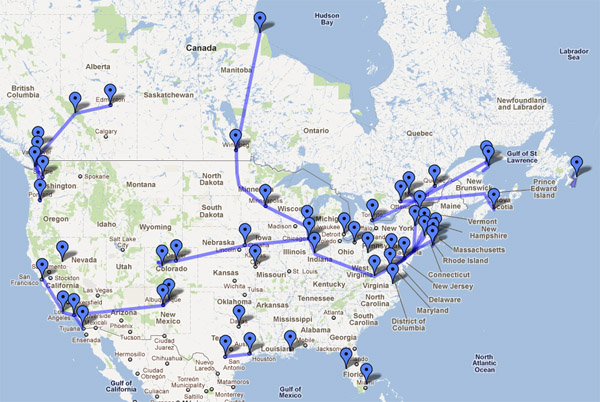 Travels to date by rail and bus

A couple of photos from recent train journeys…

View from the window of VIA Rail's "The Canadian" train

Paul Chibeba now lives in London and works for the Royal Botanic Gardens, Kew after having spent nine years living and working in New York City.
View all posts by Paul Chibeba →
This entry was posted in Uncategorized. Bookmark the permalink.

1 Response to North America by train; a passion, not friends-with-benefits